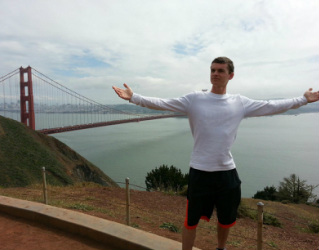 Reed is a junior at UW who, after jumping around quite a bit, has decided on a major in Psychology. Reed is a Seattle native who came from Bishop Blanchet High School where he reinforced his tendencies to jump around in interests. In addition to recreation league soccer and basketball teams, Reed played five different sports in high school including: Freshman football, Track, Cross Country, Tennis, and Lacrosse. It wasn’t all fun and games for Reed however. During his time at Blanchet, Reed earned honors every year and took several honors and AP classes. In High School Reed traveled to Mexico to help the less fortunate in Tecate and Tijuana. After his junior year, Reed traveled to Ethiopia where he helped organize a service to help newborns. Recently, Reed was an assistant at the Lamborghini Lab, otherwise known as the ACSL on the University of Washington campus; the lab is involved with research of new techniques and materials related to carbon fiber. During his time at the University of Washington, Reed has been involved with a few different Intramural teams including Basketball and Ultimate Frisbee. As a Chi Psi, Reed hopes to leave a lasting impact on the Lodge and his fellow Chi Psi brothers because he knows that there is no other place quite like Chi Psi. He believes its unique blend of academics, social life, and service to the community are unparalleled and is thrilled with his choice to become a Chi Psi. Reed will never forget the people and experiences he has encountered and looks forward to the bright future of his fraternity.
Back to the brothers