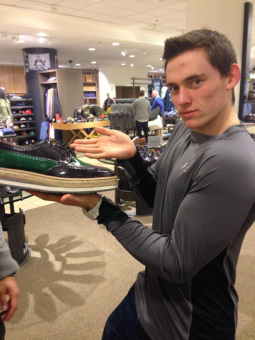 Ryan, also known as “Guibey”, is a sophomore at the University of Washington and has lived in Issaquah and the Seattle area his whole life. Ryan attended high school at Issaquah High School where he was a three year varsity athlete on the baseball team. Ryan had the option to play in college at several division three universities and junior colleges, but instead chose to pursue academics at UW. Outside of school and sports, Ryan’s passions include working out, hunting and fishing. He loves being outdoors and hopes that one day after establishing himself in the medical field to own a horse farm. In his freshman fall quarter, he lived in the dorms after missing out on the formal rush period at the end of summer. He first met the gentlemen of Chi Psi when he joined his friend on a rush tour. Ryan ended up being invited back multiple times until he was given a bid. Ryan ultimately accepted the bid becoming the final pledge in the 2013 pledge class, and he has never been happier. Ryan feels that he is having an authentic college experience at Chi Psi and he believes that he is a part of a true brotherhood.
Back to the brothers